eMotion at the Tate Modern

Submissions are now closed for eMotion

In 2016 we created our Relationship Map for Mental Health Awareness Week. It was a large scale artwork that charted people's life connections using the London Tube map. After its success we're back in 2019 with a new interactive map that will be exhibited at the Tate Modern from 11th-16th June. It will be part of the Ideas in Motion: borders, bodies, and the universe exhibition at the Tate Modern, Blavatnik Building, Level 5, Bankside, London SE1 9TG.
More info at https://www.tate.org.uk/whats-on/tate-modern/tate-exchange/workshop/ideas-motion-borders-bodies-and-universe 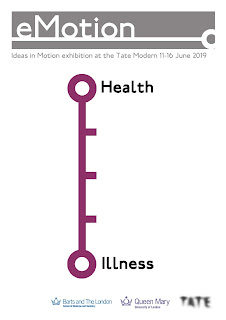 Our artwork is eMotion: Emotional Transitions in Healthcare. Ill-health requires us to make transitions: to move emotionally, spiritually, socially, physically. We adjust from being 'healthy' to being 'ill', from ‘independence’ to ‘dependence’ and back again. The project highlights the joys and fear of impermanence, of the changes that occur every second, minute and hour of our lives. It embraces movement as normal, as part of the flow of life – something that should neither be resisted nor forced.

We’ve built a huge interactive floor map, in the style of a tube map, which has ‘end stations’ labelled with key points of ‘stasis’. The ‘station stops’ in between are open for people to explore how they navigate these transitions. We would like your help in creating a map so that visitors at the Tate can navigate a path along these routes of transition.

Please contribute your words below and be part of the exhibit. Your name will be printed on the map and exhibited at the Tate Modern.
We have nine “lines” in our eMotion map, each starting and finishing with people, places or things that you might move between during your life:

There are three blank “stops” for each line. We want you to fill in the blank stops for as many lines as you want, which best sum up how you connect these concepts. Write a title or name (no longer than 4 words) that describes each stop on your journey. For example: what does it feel like to be in the middle between Hope to Fear, or closer to Hope, or closer to Fear. You could write something like: Hope – Last Minute Corner – First Game of Season – One Nil Up – Fear.

We'll be working with Harvey Wells, Kevin Acott and the team at
Queen Mary University of London

Posted by Collect Connect at 00:51