Sam Tout and Alban Low's new exhibition along Tolworth's famous Broadway continues with new plaques dedicated to local heroes Thomas Dumper and Nobby Reddick. Sam's plaque is inspired by a lovely doughnut he ate at the Moda Caffe. This week they are joined by CollectConnect co-founder Dean Reddick, who has chosen to honour his dad as his hero. 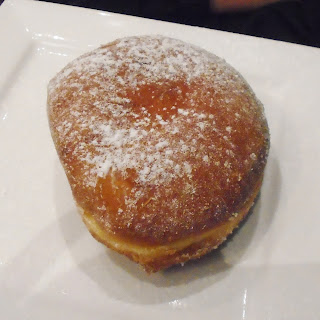 Doughnut
Here is Sam Tout's delicious haiku........and above is the doughnut before it was gobbled up.

Dean Reddick's plaque is dedicated to the incomparable Nobby Reddick. Nobby (born 1945) and his wife Sonia have been residents of Tolworth for many years. He has worked as a painter and decorator for most of his life and continues to be an active member of the community.

Thomas Dumper
Our third plaque is dedicated to Thomas Dumper (1861-1943). Dumper was a member of Surbiton Council for forty years and was second substitute Charter Mayor. For some years he was a police sergeant (270 Division) and saved a man's life in 1887 when the man deliberately threw himself off Westminster bridge. He left the force in 1898 to become licensee of the Red Lion, Tolworth, and retired as victualler in 1925. Dumper was “father” of the Council, and an alderman when he retired from the Council in 1940. He was chairman of the Surbiton District Council from 1917 to 1920, and was made the first freeman of the borough of Surbiton in 1937. In the 1918 Parliamentary election he unsuccessfully contested the Kingston Division as a Labour candidate.

Posted by Collect Connect at 07:41