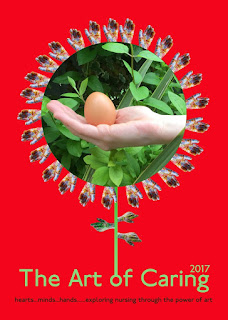 We're putting the finishing touches to this year's Art of Caring at St Pancras Hospital, another fantastic exhibition that combines original artwork and postcard art from around the world. The first exhibition at St George's Hospital was very much appreciated by staff and patients in May and this is another opportunity to celebrate the work of Carers, Nurses and the NHS.

I hope you'll all join us on Thursday 20th July from 5.30pm -8.30pm for the Private View. There will be refreshments and entertainment. St Pancras Hospital curators Peter Herbert and Elaine Harper-Gay have chosen a selection of original artwork to go alongside many of the postcards that were originally exhibited at St George's Hospital. We couldn't have a Private View at St George's so please come along on the 20th July to St Pancras and meet everyone who has been involved in the exhibition in 2017.

The exhibition is open Monday to Friday, 9am to 5pm, until October 19th. Last year we had a closing event with a talk from artists and a film screening too. If we have a Closing Event this year I'll let everyone know. 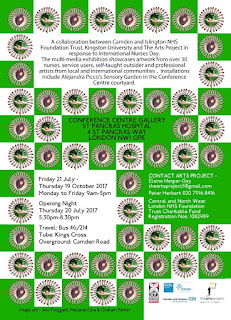 For those of you that haven't seen the photos from the Art of Caring 2017 at St George's Hospital then follow this link HERE.

Posted by Collect Connect at 09:00