Last night (20/07/2017) we officially opened the Art of Caring at St Pancras Hospital with a fantastic summer's evening of wine and song. The exhibition started as a postcard show at St George's Hospital way back in May but here it took on a new life. St Pancras curators Peter Herbert and Elaine Harper-Gay brought together many of the postcards again but also a healthy slice of original work by the artists involved. 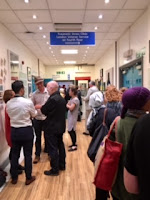 There were many eye-catching contributions, including David Marron's Fentanyl Dreams, and Mark Carr's two paintings from his Cup of Life series. Two sculptural pieces which captured the attention of the Private View revellers were Louise O'Boyle's glass domed world and the Melanie Ezra and Graham Parker hand that reached out from beyond the a mirror. Once again Herbert and Harper-Gay had engineered an artistic exhibition that broke boundaries, creating a new exciting physical space but also an emotional world that talked of compassion and shared experience.

Many of the artists exhibiting were also in attendance. This was Caroline Streatfield Chalk's first exhibition with CollectCollect, while Ella Penn is a die-hard of the CollectConnect inclusive genre and has been exhibiting with us for more than 5 years. Penn had brought along Freya, the subject of her Alopecia Tableau, to join in the opening night celebrations. Aran Illingworth had sold two of her beautiful textile pieces by the end of the night, as had the famous Stuckist and Outsider artist John Sheehy. Chris Brown and Dean Reddick chatted amiably to the gallery visitors, and David Napier was on hand to demonstrate his ceramic chessboard/backgammon set. 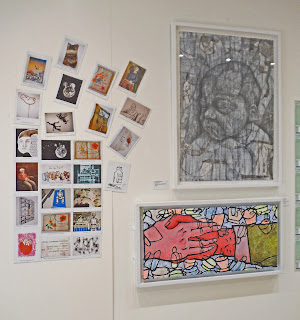 The Sensory Garden was full of visitors and just by its entrance was Jill Rock and her challenging work Duty of Care. Many more of the artists were in attendance, thank you to everyone who was there to make this night such a success. We had speeches from Caroline Harris-Birtles (C&I Director of Nursing) Andrew Machin, (Associate Director and Charity Development Project Manager from The Central and North West London NHS Foundation Trust NHS Charitable Fund) and Paul Newcombe (Pre -Registration Nursing Course Leader at St George’s Hospital and Kingston University).

We were treated to a live set of original country and western ballads from The Sarah Vista Social Club (with Jeff Mead). It was an evening both of celebration and though provoking pathos, many of the artists were explicit in their support for Nurses and NHS, with artworks that highlighted the political and financial threats that currently harry the profession.

Once again thank you all for supporting the Art of Caring. The exhibition runs until the 19th October at CONFERENCE CENTRE GALLERY, ST PANCRAS HOSPITAL, 4 ST PANCRAS WAY
LONDON, NW1 OPE. Please go an visit.

You can see a selection of photos by following this LINK.

See you next year.
Posted by Collect Connect at 08:43