Today we said goodbye to a wonderful artist and a friend of CollectConnect. Alan Sherwood-Page exhibited with us when we took our magnets onto the streets for the first time at FAB Fridge in 2010. FAB Fridge was a tremendous success as part of the Fringe Arts Bath festival and ever since we have been exhibiting in public places. 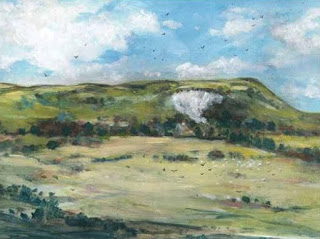 Alan Sherwood-Page was born in Eastbourne in 1939. At the age of 6 Alan was blinded in one eye, although this stopped him playing sport he channelled all his energies into astronomy and at the age of 10 owned his first telescope. In 1957/58 Alan joined the Royal Observatory which had finally moved to Herstmonceux from Greenwich (the transfer began in 1947). At its peak, over 200 people worked at The Observatory and lived in the local community. Alan was one of the personnel who operated the Thompson 26-inch telescope at Herstmonceux. Called ‘night observers' they were on duty every night when the sky was clear and the Moon not too bright. 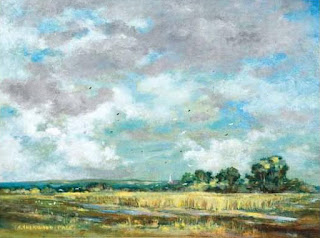 Aged 20 Alan studied Fine Art and Stained Glass at the Central School of Art in London. Eventually he became a teacher at Kingston College of Art where he taught Drawing and Film-making. He loved collecting rare books and renovating scientific equipment in his spare time. He was a Deputy Church Warden at St Peter's Church, Petersham and enjoyed the pastoral landscape of the Meadows next door, helping look after the cattle that graze there in the summer.

We know Alan as a painter, a man who created beautiful landscapes of East Sussex. He often worked from his imagination which only heightened this sense of beauty and otherworldliness in his work. We miss you Alan. 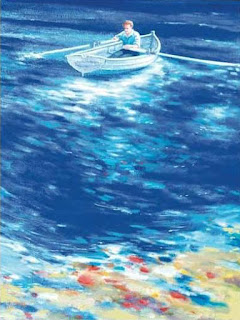 Posted by Collect Connect at 08:16