Small World Futures is a collection of 38 miniature sculptures depicting what life could look like in years to come. Each of these small artworks will be placed in public spaces (#unsettledgallery) around London Bridge. Every day throughout February we will be featuring one of these worlds here on the website. A writer will also use the world as inspiration to create something new and fresh, their words describing the shape of a new world.

Today we discover the Small World Future of....Alan Carlyon Smith
The year is 2118

What Can You Do?
Thank you for coming here. Thank you for coming to 2118, I know the cuts and The Terror have messed up Time Travel For London’s services but I have a story to tell you. And I know you’ve been here before but there’s something I need to emphasise before I begin. Here, when you decide to have a baby, you can choose whatever you like. A normal boy, an abnormal girl, an enigmatic and slightly flakey twin-spirit, a grumpy post-identity LGBTQQTGYSTA++ re-born, a saxophonist2B, a lion tamer2B, an Elvis impersonator2B. Just tick a box, pay your Thalers, wait nine months. Well, wait nine months and then another twenty or thirty years in some (2B) cases.

Anyway. After much ‘discussion’ last year, we chose to have a President2B. I already have a minor-celebrity2B, a Spurs-defender2B and a Poet-Laureate2B. My wives both - like so many twin-spirits - wanted a President2B. I pushed against the idea for a while: what if he became a LabTor? What if he hated the Elite? What if he was assassinated? What if he brought about the end of the world? A president was bound to be trouble. Lucrative, OK, but trouble. And he’d have to - *have to* - become President by the age of thirty. Otherwise I’d be deliquesced before it happened - and I need at least a brief surge of pride before I shuffle off and re-enter space.

They changed the law last year, you may have missed it? 55 is the new EOUL. The end of useful life. You have that in your time? EOUL was 60 this time last year. They keep changing it. Which worries me a little, but what can you do? You deliquesce when they decide it’s time.

So, yes: the little one would have had to become President before I reach 55. We saved and saved and finally ordered a President2B. The excitement was palpable, even though Wife 1.0 changed her mind halfway through, said she’d really have preferred an Accountant2B.,

I know. I can see what you’re thinking. That’s no President2B. No, it’s not. What did we get? We got a Messiah. A bloody Messiah. Look at him. Cute, eh? And look at his Mother, 1.0. She’s taken to it like a duck to water. Even wearing all the old blue stuff and beaming beatifically. She looks like a kid again. In public, anyway. Jesus. If you’ll excuse my language. His other mother hasn’t stopped drinking and partying since it happened. She gave birth to half of him but she couldn’t care less. Or she cares too much - who can tell? Either way, it’s leaving me with far too much to do. I hardly have time to play with my abacus anymore.

Hmm. Apparently, there are only three Messiahs on earths. This one here, two in your time, none at all prior to 1932. They’re not - of course - Messiahs2B, they’re actual Messiahs. A Messiah doesn’t become, it just is. Though the two in your time aren’t recognised for what they are yet. May never be.

So. Now I’m the father of a Messiah. I’m a... a sort of Joseph. You never hear much about him, do you? He always took a back-seat to young Mary, sawing and hammering and sanding and being a silently typical man. I don’t intend to be like that. I’m going to say what I want. When I want. The days of the FemiNazis are over. Oh yes.

Could you... um... take him? With you, I mean? Could you take the baby back to your time? The truth is, I don’t want a Messiah for a son. I don’t want a Madonna for a wife. Or a whore, for that matter. I just want to be a scientist. And rid the earths of foreigners whenever I can.

Four hundred and sixty Thalers. Go on. The wives are asleep. Take Him. You’re hesitating? Why? Imagine what He can do for you! It’s win-win.

OK, five hundred. Good. Thank you. You know it makes sense. Best decision you’ve ever made. You’ve made a young man and his father very happy. 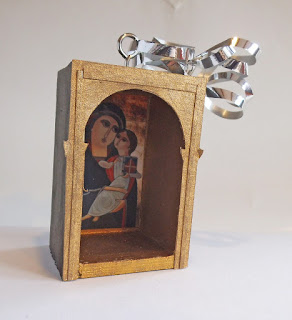 You can find Alan Carlyon Smith's Small World Future tied to a wire fence on Snowsfields, London Bridge, next to #unsettledgallery No.4. If you can find it then you can take it home, or perhaps you will leave it for someone else to discover.

Alan Carlyon Smith is an artist and curator currently working from his studio in Wimbledon. He has curated a number of exhibitions at the Shaw Gallery in Croydon, including The Jade Event, Art Jazzed Up and Ballet Russes. The latter involved the London Russian Ballet School performing in the Mitre Theatre. Smith enjoys exhibiting his art in the public domain and regularly contributes work to the Art of Caring at the Rose Theatre (Kingston), St George's Hospital (Tooting) and St Pancras Hospital. In 2015 his work was included in the 70th Anniversary of Korean Liberation International Art Exhibition in Seoul. As a studio artist he works in a range of mediums and has been shortlisted for the BP Portrait Award at the National Portrait Gallery.
www.wimbledonartstudios.co.uk/alan-carlyon-smith/

Kevin Acott is a London-based model, cult singer and poet. He divides his creative time between writing, photography and collaborative projects. His stories and poems can be found on the websites Sad Paradise, Londonist, Smoke: A London Peculiar and Ink, Sweat And Tears. In 2017 he dedicated six months to travelling and writing. Starting in North Carolina (USA) he eventually ended his adventures in Limoux, France. Along the way Acott spent a month as writer-in-residence in Qaqortoq (Greenland) where he wrote several short stories. He has released several books with publisher Sampson Low and is currently working toward a one-man show at this year's Crouch End Festival in June 2018.

Posted by Collect Connect at 00:58