Small World Futures is a collection of 38 miniature sculptures depicting what life could look like in years to come. Each of these small artworks will be placed in public spaces (#unsettledgallery) around London Bridge. Every day throughout February we will be featuring one of these worlds here on the website. A writer will also use the world as inspiration to create something new and fresh, their words describing the shape of a new world.

He wandered the earth for a few weeks after The Great Comeback. He met up with old mates, his parents, his disciples. Well, eleven of them, anyway. Everyone who met him felt calmer, surer. Everyone felt a little less angry. He seemed, for a while, like a bit of a force for good. A mate of mine - a PA to Pontius Pilate - said even The Prefect spoke well of him.

We weren’t all so impressed though. Some of us wondered why he didn’t do more. He could have done anything he wanted - anything. He could’ve made a real difference. But no. He had A Cunning Plan, apparently. And one afternoon - forty days after - he gathered a few of us together on a hill and we watched him Ascend. Just like that. That grief-stricken night, he called me and I followed him Upstairs: what else could I do? I was a little flattered, to be honest. And a little scared. And a little ecstatic. He was so, so lonely. Always had been. I think the sharp, dark anomie he’d always carried with him like a sack of rocks finally got to him. What do you do after you’re Resurrected? After you’ve made your point? After you’ve made The Point? I knew what I’d done, what we’d all done. That too helped me make the decision to join him.

Time nodded past us. Years, decades, centuries. We sat, the two of us, in his father’s place and talked and sang and watched what was happening down there and reminisced. I apologised. I apologised so much.

Together, we watched acts of kindness, of sweetness. We watched The Inquisition. We watched games of Scrabble and stand-up comedy. We watched The Holocaust. We watched love-making and cheese-eating. We watched The Trump War. And then, one day - October, 2035 - He announced he was going to go back. He asked me if I wanted to go with him. But it felt wrong. ‘I’d rather not,’ I said.

I watched him. I watched him Descend and announce Himself. Some laughed when they met him. After a week or so wandering, chatting and sunbathing in The Secular State Of Israel, he took The SpaceHopper, for some reason, to The Free And Proud Kingdom Of England (c) (TM). And people there told him to go back to where he came from.

And then he went to Greater Russia - to Moscow and to Krakow and to Ljubljana - and to the Beneath-The-Wall Southern States - to Texas and to Louisiana and to Mexico. He spoke to people, performed miracles, started delivering speeches, sermons - in ShopMalls, on the MindWeb and in Insert.

I think I saw what was happening before he did. They were interpreting. They were twisting. They were skewing his words. All dully predictable, of course. They started to wrench his words to fit their ideas, their hates, their desires. Some said He was the reincarnation of The Great Boris. Some that he was the new Martin Luther King. A group in France said that he was Johnny Hallyday.

He stuck with the stuff that had always (sort of) worked: be kind, be nice. But I watched him getting older, tireder. He did a lot of bathing of sinners, men and women, boys and girls, and he was soon ‘exposed’ as a sex pest (#Christperv). They started a campaign to have him banned from universities.

There was no Ascension this time. I gradually realised he knew all of this would happen, knew the message this time would be so much more powerful without the party tricks. And I decided then: I needed to go down there. I knew what I had to do.

I think you do too.


You can find Bethany Murray's Small World Future between two concrete bollards where Weston Street meets St Thomas Street (London Bridge) at #unsettledgallery No.1. If you can find it then you can take it home, or perhaps you will leave it for someone else to discover.

As an artist Bethany Murray takes seemingly empty space, juxtaposing it with physical matter in an attempt to make the intangible tangible. Through the use of cast space, poetry and found objects she attempt to describe a sense of ‘otherness’. Exploring the distinction between the known and unknown that is directly linked to her research of the ‘sacred’. These mere encounters with material and language sit in the hinterland between that which is considered earthly and the ethereal.
http://bethanymurray-artist.blogspot.co.uk/ 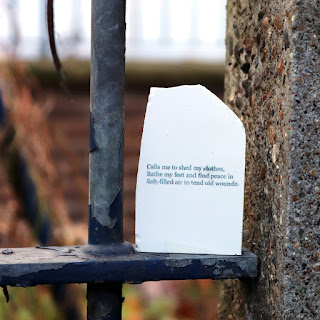 Kevin Acott is a London-based model, cult singer and poet. He divides his creative time between writing, photography and collaborative projects. His stories and poems can be found on the websites Sad Paradise, Londonist, Smoke: A London Peculiar and Ink, Sweat And Tears. In 2017 he dedicated six months to travelling and writing. Starting in North Carolina (USA) he eventually ended his adventures in Limoux, France. Along the way Acott spent a month as writer-in-residence in Qaqortoq (Greenland) where he wrote several short stories. He has released several books with publisher Sampson Low and is currently working toward a one-man show at this year's Crouch End Festival in June 2018.

Posted by Collect Connect at 01:44