No Point
I remember Nina telling me a joke in Paris one night about sticking a finger in a dyke. She was shocked at how shocked I was. I was shocked at how shocked she was at how shocked I was, and we realised how little we knew each other. I know now that was the moment we chose to try to find each other and that was the moment that condemned us forever to looking at each other from afar.
Nina left Paris before me and I met Dalida soon after and Dalida was beautiful and doomed and sad and hated Americans and hated the blues and every time she beckoned me to her in that Italian, Egyptian, Martian way of hers, I thought about Nina. One broke Spring day I wrote a song for Dalida based on an old Django thing I half-remembered from Vancouver and every time she drank too much wine, she'd demand I sing it, wherever we were. I remember jumping on stage and pushing an old jazz man out of the way once at Le Bar Blomet and playing it, just to make her smile. By the time I'd finished, she'd already left the place and I wouldn't see her for a week.
I can't remember the words of D's song at all. It's funny: I could play you every note, every chord, I could tell you what I was thinking every time I sang it, what she was wearing. But the words have all gone, even the title has disappeared. I suspect Nina removed it from my mind, some time between Paris and Greensboro.
From 'Chopsticks Nelson: In His Own Words', published by Faber (1984)


Epping Forest is a Site of Special Scientific Interest, bordering London and Essex and is an Ancient Woodland, one of the few left in London. The sculptor Jacob Epstein lived on the edge of the Forest. Nowadays the Forest is used by dog walkers, mountain bikers, horse and pony riders and picnicking friends and families as well as footballers, bird watchers and runners. I like to imagine all the lovers who might have left their own love tokens in the forest over the centuries. The Forest has also had its share of Bad Pennies reaching up to the present day.Take a walk through the Forest and see if you can find a Love Token or a Bad Penny. 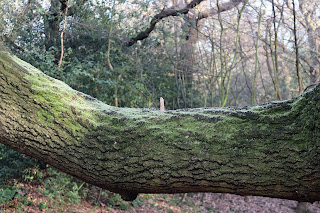 John 'Chopsticks' Nelson (February 14th, 1926 – July 13th, 1979) was an American blues singer, guitarist, actor and composer. Notoriously reclusive and hostile to both media and fans alike, Nelson remained a little-known but passionately-followed figure in the Carolinas, Virginia and Georgia for much of his life, before becoming more widely known with the release of 'They Call Me Chopsticks' in 1976.
Originally a backing singer and session guitarist, he contributed to many albums by other musicians, including Sonny Boy Williamson, The Rolling Stones, ZZ Top, John Lee Hooker, and Muddy Waters.
Over the course of his career, Nelson's music took on an increasingly spiritual dimension, culminating in the controversial 1974 triple album, 'God, Allah and Yahweh' and live shows that became a focus for attacks by the Ku Klux Klan.
Nelson remains one of the most influential - if least understood - bluesmen in music history. He died in a hunting accident in West Virginia the day after his fourth album entered the Billboard charts at Number Two in July, 1979.

https://twitter.com/ChopsticksNels1
Dean Reddick is an artist, an art therapist, occasional lecturer and editor on the Art Therapy Journal ATOL. He has a small studio space at his home in Walthamstow where he works on sculptures and drawings often based on his fascination with birds and trees.

Don't forget to submit to our next exhibition. The Art of Caring is accepting submission until the 7th April 2019. More HERE.
Posted by Collect Connect at 01:15