It is a heavy thing, this locket, this lock.
Guardian of a gate to the other end
but without a key.
Jewel crusty and gaudy gold on the up side
you can feel the heat seeping through.
I clench it in my fist like brass knuckles
ready to swing at the would be Angels
who declare what love is.
They blind themselves and forget.

Love is the fire which we all dance around.

Debbie's artwork nestles in a flowerbed at the Dogend site in the #unsettledgallery which includes, railings and gates, as well as spaces between bricks, in gullies and beside drainpipes - basically anywhere an artwork can rest and be seen by the public. These spaces change and evolve on a daily basis although some artworks survive for a longer period of time. 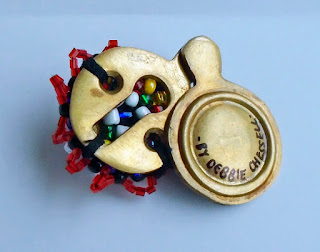 Debbie Chessell is an exciting new artist breaking onto the public art scene. As a Kingston University student she launched a non-profit campaign on confronting rape culture that brought together groups of artists, activists and designers in a series of workshops, art exhibitions and publications. She is currently collaborating with Kingston Council running a drawing and painting course for the Centre of Community Development, which focuses on outreach with Kingston residents especially those from ethnic minority backgrounds. Speaking about her burgeoning career so far, Debbie said: "I have loved drawing and painting since I was a small child. My artworks have been exhibited across the UK and feature in international collections including the Suzzallo Library in Washington USA and St George's Hospital in Wimbledon London."
www.debbiechessell.com

Dean Reddick is an artist, an art therapist, occasional lecturer and editor on the Art Therapy Journal ATOL. He has a small studio space at his home in Walthamstow where he works on sculptures and drawings often based on his fascination with birds and trees.

Don't forget to submit to our next exhibition. The Art of Caring is accepting submission until the 7th April 2019. More at http://collectconnect.blogspot.com/p/submit.html
Posted by Collect Connect at 01:26