Life was hard and grey and pushed together. The days would not make room for her. They jostled and overlapped and squeezed. On and on and on went the days and all that time it was growing. She didn’t know about it. It didn’t ask for anything. It did it all on its own.
Until one time, tired in the moonlight, she saw it. It was red and streaked with silver. It held itself by its own stem and waited for her.

Susie's Love Token stands on a post on the path at the edge of Epping Forest.
The Forest is a Site of Special Scientific Interest, bordering London and Essex and is an Ancient Woodland, one of the few left in London. The sculptor Jacob Epstein lived on the edge of the Forest. Nowadays the Forest is used by dog walkers, mountain bikers, horse and pony riders and picnicking friends and families as well as footballers, bird watchers and runners. I like to imagine all the lovers who might have left their own love tokens in the forest over the centuries. The Forest has also had its share of Bad Pennies reaching up to the present day. Take a walk through the Forest and see if you can find a Love Token or a Bad Penny. 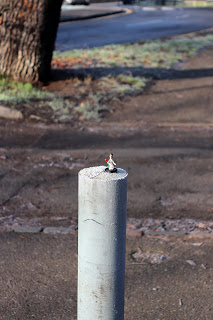 Susan Mendelsson was born at Hackney, London and educated at the Manchester Metropolitan University, gaining a B.A. (hons.) in Graphic Design. She then took a Teaching Diploma in Art from at University of Haifa, Israel and an M.A. in Fine Art from Coventry University. A figurative artist who has been influenced by the German expressionists as well as medieval art and works mainly in paint and mixed media. In her Suffolk studio she creates the most amazing 3D figures and characters often made from found objects.


Ginny Reddick is a writer and educator. She was one of the artists who exhibited at the first ever CollectConnect exhibition, Open Fridge, in March 2010. Although there has been a 9 year hiatus between that exhibition and this one she has curated numerous CC projects including the Walthamstow street art favourite HideBird.

Don't forget to submit to our next exhibition. The Art of Caring is accepting submission until the 7th April 2019. More at http://collectconnect.blogspot.com/p/submit.html
Posted by Collect Connect at 00:44