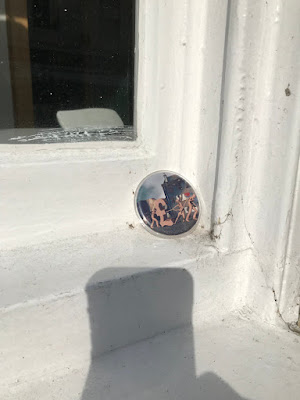 Acts of Resistance​, this year's theme for #groving, continues today with the placing of Bryan Benge's badge in the Buttermarket.

​What a drag it is,
not just mum and dad

but the whole family,
needing to pull together

in a sterling effort
to bring home the bacon,

while revolution
flourishes in the house

and on the box –
Liberty leading the people.

We’re all right,
we’re all white,

but revolution
is steadfastly going on

beneath our calm exteriors.
And left out in the cold

that’s what we voted for,
but it looks like

we’ll just have to
get on with it,

do it on our own,
with incessant argument

going on inside ‘The House’,
between these four walls.

Bryan Benge has exhibited widely, including with the London Group, and recently in In The Dark, The Cello Factory, London; The Art of Caring, St Georges Hospital, London in 2018 and 2019; Penrith Gallery, St Ives; Pulchri Studio, The Hague. He has work in numerous private collections, and in the Tate Gallery Archive. See www.bryanbenge.co.uk 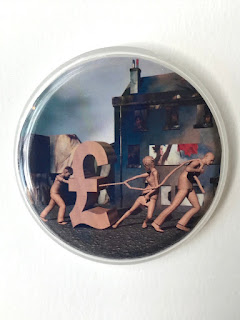 ​Phil Barrett taught art for 27 years, then retired to his home county of Norfolk where he concentrates on writing. He teaches creative writing, in schools and libraries across North Norfolk. He has won prizes and commendations in national competitions, and has been published in anthologies including In Protest: 150 poems for Human Rights (2013), Word Aid Anthologies Did I Tell You? (2010), and Not Only The Dark (2011), the Ink, Sweat and Tears webzine, and Poems in the Waiting Room in 2016 and 2019. In January 2017 he published a book of poems, Writing Me, about growing-up.