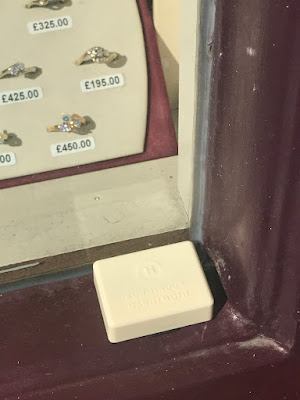 Read this aloud and as quickly as possible. We don’t have much time.

I want to tell you about this geezer - diamond geezer - drank Double Diamond most of the time this geezer did, at least in photos, you know what I mean? It’s tough right now, I understand that, he says, some of my best friends, many of my fans, are diamonds in the rough too, he says, like you, he says, trust me he says, I’m one of you he says, just trust me, I get what you’re going through, it’s tough - so tough - but I’ll make it all go away, trust me I’ll make it right, I’m one of you, always have been...

On the radio in the USA, they say, when I was still at school, there was a DJ called Dave Diamond (look him up) who was funny and clever and wise and kind, wisely played the fool, and flicked and kicked and twisted words (in a good way), hit his listeners' truth and hope all over the baseball diamond of their shared lives, he was a girl’s best friend was Dave Diamond...

Anyway, back to Double Diamond Man: he drops Latin into his conversations with us and is adamant (get it?) he only lets us know what he knows because he’s one of us, even got a bus once, sits in pubs and - though we all know adamao (the root of the word) means ‘I tame’ or ‘I subdue’ in Greek - he still fools enough of us enough of the time. Diamonds are forever, after all.


Read this next bit more slowly.

1) Did you know diamonds refract?
They deflect the straight path of light.
2) I think we’re all, in essence, blood diamonds. In this time of conflict we sit while he uses us to fund his efforts to make war, to forge ugliness from beauty.
3) We should make Dave Diamond our leader. Before it’s too late.

Julia Manheim's work has encompassed contemporary jewellery, public art projects, sculpture, installation and video. As grove resident artist in July this year, Julia walked through Bury St Edmunds and the discarded objects that she found took on a new life in a beautiful  installation.  See www.quay2c.com/index.php/m2/detail/julia_manheim1

Kevin Acott is a writer, lecturer, whiskey lover, and Spurs sufferer. He’s a sort of left libertarian/sort of anarchist who feels strangely attracted to French chansons, Greenland and Joseph Conrad as he gets older. His own acts of resistance have included wearing socks with ‘Tuesday’ on them on a Thursday and ordering coffee before the starter 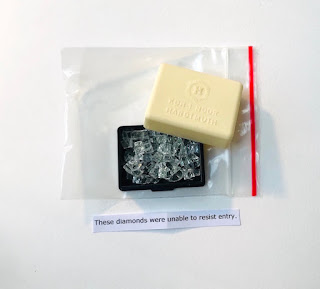 Posted by Collect Connect at 13:25