I woke up this morning to read that the Government has revealed its England Tree Action Plan. You can check it out here: England Trees Action Plan 2021 to 2024 - GOV.UK (www.gov.uk)
Friends of the Earth had the following to say about the Plan:
'But following huge public pressure to set a target to restore tree cover, the England Trees Action Plan states that the government will consult the public on a long-term target next year. And although it’s ridiculous to delay given the urgency of the climate and nature emergencies, it at least leaves the door open for a bold binding target next year.

As for the rest of the plan, quite frankly it’s not worth the paper it’s printed on. It recycles the old aim to achieve 12% woodland cover by "mid century" (it previously said 2060). And the pledge to plant 7,000 hectares of woodland a year in England by 2024 will leave Scotland and Wales doing all the heavy lifting to achieve the UK’s overall, and inadequate, targets. That's not good news, especially when tree planting programmes in Scotland rely on non-native confers.

So there’s work to do. And when that public consultation launches next year we’ll all need to speak up loud and clear for an ambitious target to restore the right kind of trees in the right places.'
from  Friends of the Earth campaign email

Melanie is a Wales-based fine artist. She often works in series, providing visual responses to external stimuli such as literature, science, and music. Melanie openly describes herself as a ‘renegade arts experimentalist’ and is happy dabbling in anything that pushes her work to the limit and broadens her own potential. A big thank you to Melanie and all our artists and writers for  supporting and contributing to  CollectConnect.

Dean works with Alban and Bryan at CollectConnect and is the author of the Urban Bonsais blogs, an art therapist, writer, editor and artist. 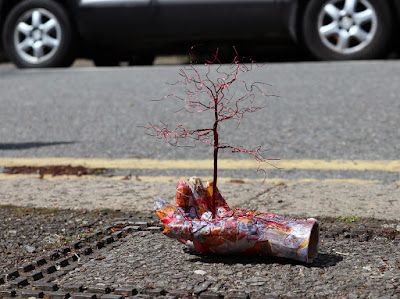 The virtually stitched hand of the Goddess

reveal not the command tree in one dimension

cabled up, out and round. 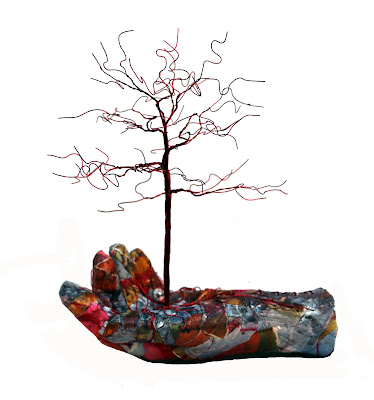 Posted by Collect Connect at 00:28