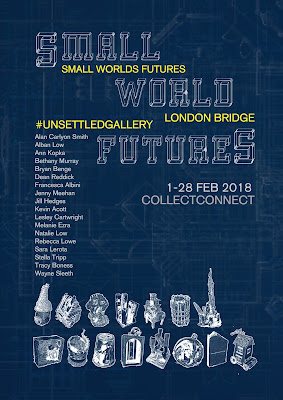 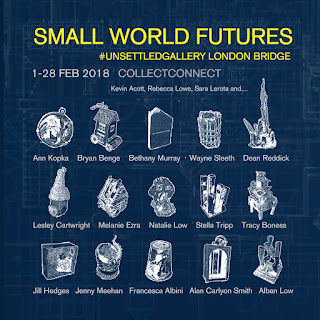 Posted by Collect Connect at 11:54 No comments:

It is with a heavy heart that we learnt the news that one of our regular contributing artists, Tom Hosmer, has died at the age of 69. Many of our artists dip in and out of our exhibitions so we don't always keep in regular contact but we started to worry as we hadn't heard from Tom in the last four years. He died on 4th March 2013 in Pennsylvania, USA. Just the day before his death we had been in contact about sending him a copy of the Patternotion book, one of the early CollectConnect publications that he had contributed to.

Tom first exhibited with us for the Brighton Open in 2011, and quickly followed that up by exhibiting magnetic art on the gates of Hastings Pier at Rarities (2011). He was so inspired by this spirit of inclusivity that he organised his own magnet show. In August 2011 he worked with the New Hampshire chapter of the Women’s Caucus for Art (WCA-NH) to exhibit hundreds of magnets at the Minor Threat Pop-Up Gallery. He also hit the streets of Concord, placing magnets on store facades for the public to pick up. http://artconcord.blogspot.co.uk

He was a man of many talents and loved being creative, he sculpted and was a keen photographer. I shall remember him as a great thinker, a sensitive man, a person who chose his words carefully and cared very much about the world and its children.

Collectconnect published two books with Tom's work in it. FreedBook was released in 2012 when a group of us visited all the Books For London libraries on the London transport network (80 miles!). Tom submitted one of his poems (see above). Tom was hugely enthusiastic about being part of our modest group of artists, and was very keen to be included in our second book Patternotion. We released Patternotion on the 9th March 2013, unknown to us he had died just a few days before. The book tried to inspire people to make interesting and positive changes in their lives. Here is Tom's contribution.....

"When I was really quite young, I remember browsing through the local Woolworth's Five & Dime.  There was a middle age couple dressed in working class clothes, who were standing silently staring into space not saying anything for some minutes, and then conversing and then silence again.  I stood some distance away from them watching.  They went on for a number of minutes in this manner.  Even in this mime I could imagine the words exchanged and the thoughts which were held in silence.
After a while I moved on, but I realized that they were agonizing over a decision to make a purchase, and that the purchase would impact them in a very deep way financially.  And, as I have walked through life I have seen this same scene play out in differing ways not only across this country but in different nations over the globe.  Even in rich cities and countries, you can see the Invisibles if you just stand in one place long enough and watch."
Tom Hosmer (2013)

Thomas Hosmer was born August 21, 1943, to Harold and Mary Hosmer in York, Maine, the middle child of three. He graduated R.W. Traip Academy in Kittery, Maine. Tom was deeply affected by the war in Vietnam and the involvement of the USA. In 1968 he dodged the draft and escaped to Montreal, where he spent months struggling with the personal conflicts that burned inside of him. He was a contemporary of both Mark Lane and Dick Gregory in Canada. Tom was imprisoned upon his return to the US and had a mixed time in New York after his release. With prison fresh on his mind he found it hard to get involved with the esoteric events in the city but it didn't stop all his cultural activities, as he explains....

He worked as a merchant seaman and brought up his two children, Pieter and Sarah Van Cor-Hosmer. In later years he moved to Warner, New Hampshire where he was often to be found in the company of fellow artists and poets. He took great comfort in the beauty of nature, a passion he shared with friends David M Carroll (Macarthur Foundation Fellow) and his wife Laurette.

We will miss Tom, his wisdom and his kindness. 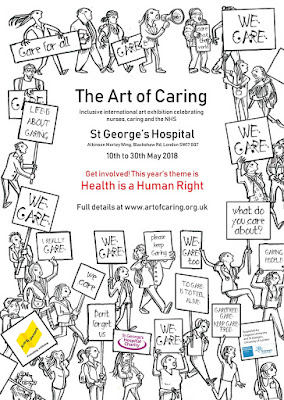 Now in its 4th year The Art of Caring is needed more than ever to show support for Nurses, Carers, and the NHS. This is your chance to exhibit an artwork or haiku that demonstrates your passion for this theme. If this is your first time then check out Anna Bowman's documentary film about last year's exhibition HERE.

The Art of Caring is split into two clear exhibitions.
The first is at St George's Hospital (10th-30th May 2018) where printed postcards of your artwork are displayed on the walls of the hospital to help celebrate International Nurses Day. This is an inclusive exhibition.
The second is at St Pancras Hospital (July - October 2018) and uses a mixture of original artworks and printed postcards. Works will be selected by the
Arts Project curators Peter Herbert and Elaine Harper-Gay.

It is Free to enter.
Send up to 3 jpeg images at an A6 size to collectconnect4@gmail.com
and/or send a haiku to the same email address

We are looking for artworks/poems about Care and/or Caring but also consider the theme for International Nurses Day this year..... Health is a Human Right.

You will receive a confirmation email within 7 days with your catalogue/exhibition numbers.
Before the exhibition we will print 2 postcards of each of your artworks. One copy will be sent to you and the other will be exhibited at St George's Hospital, Tooting, UK from the 10th-30th May, 2018.


For the full details about how to submit your work visit our SUBMIT page.
Deadline for submissions is 6th April 2017
(We may close early if all 400 exhibition spaces are filled)


Posted by Collect Connect at 06:04 No comments: