Thank you to everyone who has supported our Love Tokens and Bad Pennies exhibition. From artists to writers, and not forgetting all of you who have been out looking for artworks and getting involved online. After placing artworks out on the streets for 30 days we reach the end of the exhibition. Today we are posting the final artworks, some have written pieces to accompany them and some exist on their own. We will try and write an update in the next few weeks, visiting some of the locations and see if the artworks still rest in the #unsettledgallery spaces.

The next exhibition is the Art of Caring at St George's Hospital in May (and then onto St Pancras Hospital in July). The deadline is 7th April 2019 so please send in your artwork (It's free to enter) and support the nurses, carers and the NHS. http://collectconnect.blogspot.com/p/submit.html

Precious and frayed,
Tangled and free,
Caught in a net,
Sparkling diamonds,
Our love
Eternal

That knot in the pine brow
A cut near the front eye
The moon is high; from sides of the world where nightmares grow
You made all my fears and,
You held them in raptures
But there's no magic without death you said
You are a belief, short rotting
A prophecy dying on a dull mind
You can save your second coming,
I'm not the kind you need to pray for

Now I know where we went wrong
Growing green branches from dead wood
And I still swear that you can’t save me
Even when push, came to push, came to shove
Well you can swallow that sweet breath baby,
Until your death is the magic of love.

The first and last interview I did with Nelson, he was drunk, drunker even than other people had led me to expect. We were in his room in some crappy hotel in Mile End and at one point he started talking about desire and Muddy Waters and - of all people - Bertrand Russell. He said Russell was convinced desire dictated everything we did, good and bad. To Nelson, Russell’s ‘desire’ wasn't about sex. He meant, instead, that even when we try to do good, it's because of desire: our desire to possess, to compete and overcome other people, to look good in the eyes of the world, to have power over ourselves, others, the whole world. To become, ultimately, God.

He told me all this and I listened and tried to follow and tried to make notes and then I watched him tip gently back onto the bed and start snoring.

So. We want the best for others because we want to become God. Nelson's 'Kissinger Blues' was, I'd always thought, simply about how there's something evil in each of us, a Kissinger, a Hitler, a Trump. But in that East End hotel, I suddenly realised it wasn't that straightforward: have a look at/listen to the YouTube video of Nelson playing it at Glastonbury in '75 and the extra, rambling verses and see what he does with the song he'd once vowed never to play again: he's saying (I think) that by pretending to have good motives for being good, rather than accepting the universality of desire, of egocentricity, we not only miss the point, we find ourselves unable to truly fight racism, hate, division. I could tell you I'm writing this purely because I want to convince you of the genius of Chopsticks Nelson and help preserve his memory. But I also want to accrue, to possess, I also want you to respect me and give me power and a way of being, however temporary, that makes me feel good. And - if we can both accept that – we can eventually find peace and love and the joy of singing a single, shared song.

From the epilogue to 'Chopsticks Nelson: A Southern Life' by Kevin Acott (2019).

To see all the posts from this exhibition in one thread then click here - http://collectconnect.blogspot.com/search/label/Love%20Tokens%20and%20Bad%20Pennies

Posted by Collect Connect at 01:06 No comments:

Pass On
Old heart, pass on,
Grandfather, Father,
Son,
broken,
pass on
unbroken, pass on
divided and melted, pass on, pass on
sickened, pass on
lessened, pass on
mended and filled and pass on, pass it on. You can borrow its beat Until it's time to pass on. If we're lucky, Grandfather, Father, Son.
Lesley's Love Token lays on this battered box in a quiet residential road in Walthamstow. Waltham Forest is currently the London Borough of Culture and many parts of the Borough are undergoing extensive change with rapid housing development and large scale gentrification.

Lesley Cartwright was born in Liverpool but later moved to Essex to run a Hostel for homeless teenagers. She made her name in the commercial graphic field and music photography until she developed MS and now paints portraits from her Billericay studio. Cartwright is a multitalented artist who is not bound by genre nor convention. Cartwright has been exhibiting with CollectConnect since the Cardboard City exhibition in 2013.ttps://twitter.com/ley9
Ginny Reddick is a writer and educator. She was one of the artists who exhibited at the first ever CollectConnect exhibition, Open Fridge, in March 2010. Although there has been a 9 year hiatus between that exhibition and this one she has curated numerous CC projects including the Walthamstow street art favourite HideBird.
Posted by Collect Connect at 01:38 No comments:

Francesca's artwork sits on a  brick wall at #unsettledgallery No.3 near London Bridge. The #unsettledgallery is a gallery which includes, railings and gates, as well as spaces between bricks, in gullies and beside drainpipes - basically anywhere an artwork can rest and be seen by the public. Placing original artworks in these everyday public spaces sharpens our appreciation of our environment and brings into focus the context of the art object. 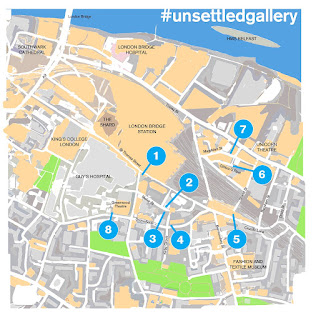 Francesca Albini divides her life between literary and artistic endeavours. She is a PhD in Classics, and has worked in publishing for her entire adult life, as a translator, author and editor. She is a self taught artist and photographer. Her work is inspired by folk art, but also by design. Albini is a collector of memories, and uses any medium that allows her to remember and share, express feelings and narrate stories. From line drawings to plastic cameras, from collage to upcycled jewellery and dolls. "My work is playful and dreamy, child-like but also philosophical. I fall in and out of love with many styles and tools, but I'm always me, whatever I do."
https://www.francescaalbini.com/


Ed Arantus is no stranger to art and writing, he first published his work in the Censored Zine (July 2010) and has exhibited his work ever since at venues like the Contemporary Arts Research Unit in Oxford (2014). Last year he exhibited his poem 'Google If' at the Museum of Futures as part of the Enemies Project.
http://edarantus.blogspot.co.uk/


Don't forget to submit to our next exhibition. The Art of Caring is accepting submission until the 7th
April 2019. More at http://collectconnect.blogspot.com/p/submit.html 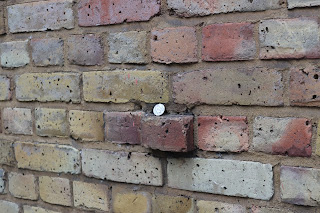 Posted by Collect Connect at 00:21 No comments: