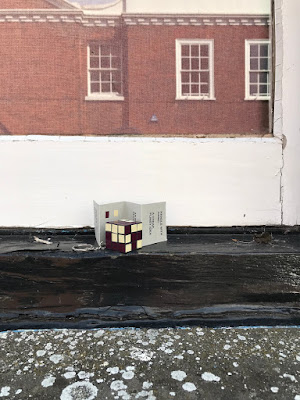 Alison Carlier's piece has found an appropriate home on a window sill at the top end of Guildhall Street.
As I write this I’m thinking about Bury St Edmunds, Suffolk in Memphis, Tennessee. I’m driving down to New Orleans (the Ipswich of Louisiana) tomorrow and I’ve just been reading something Martin Luther King said: that the real opponents of equality, the real defenders of hate and bigotry, are not the racist right but moderate whites ‘who prefer order to justice’. I wonder what he’d make of our big-small British fears here, now? And I wonder how he would pick his way through the swamps of ‘identity’ we find ourselves negotiating, dodging tweeted bullets and tube-carriage abuse as we go?
They want us to be divided into ‘Remoaners’ or ‘Brexshiteers’, to feel one thing or the other, to render the other side unhuman, because they benefit if we do. The narrow, twisted little haters benefit. The clever, clean, privileged liberals benefit. The rest of us are left feeling a kind of resigned despair and try to close our eyes while they loot all the hope from our flooded hearts.

I think somewhere, deep down, we all know the truth: the truth that we each - every single one of us - have Brexity bits and Remainy bits. And that we each have a whole host of bigotries and fears and creepy-crawly darknesses, but just don’t want to admit it. And when they give us a Rubik’s cube and tell us we can easily solve it if only we saw it for the simple child’s game it really is, we believe them...

I nearly voted for Brexit because the middle-classes didn’t want it, because Crouch End really didn’t want it at all, because I think I probably became a sort-of Socialist as a kid because I envied and admired and wanted to hurt my Mail-reading, sweet and distant Dad... and, I admit, because it’s fun to throw everything up into the air and see where it lands: order, followed by chaos, followed by rebirth. 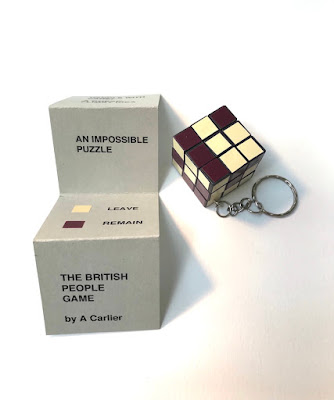 I didn’t vote for Brexit in the end. Jo Cox was murdered and I realised I just couldn’t do it: and that, if I’m honest, was about as thoughtful and considered as I got as I walked into the booth.

This isn’t really another plea for unity. It is instead, I think, a plea for us to recognise and value our own individual disunities, to try to love our own order and disorder, our own justices and injustices, for us to celebrate them and to mock them, to let uncertainty seduce us, have its way with us, spill all over us. A desire for order, for certainty is the real enemy of resistance: three years on from my/your act of emotional cross-in-boxing, I’m sure of that.

Alison Carlier studied fine art at Surrey Institute of Art & Design and has an MA in Drawing from Wimbledon College of Arts. She went on to win the Jerwood Drawing Prize in 2014, the first entry for a sound piece. She has exhibited widely, including at Fratton Festival of Light, Portsmouth; Netpark, Southend on Sea; Aspex, Portsmouth; National Gallery, London. She was awarded the Alexandra Reinhardt Residency and Commission in 2016.

Kevin Acott is a writer, lecturer, whiskey lover, and Spurs sufferer. He’s a sort of left libertarian/sort of anarchist who feels strangely attracted to French chansons, Greenland and Joseph Conrad as he gets older. His own acts of resistance have included wearing socks with ‘Tuesday’ on them on a Thursday and ordering coffee before the starter.
Posted by Collect Connect at 05:08