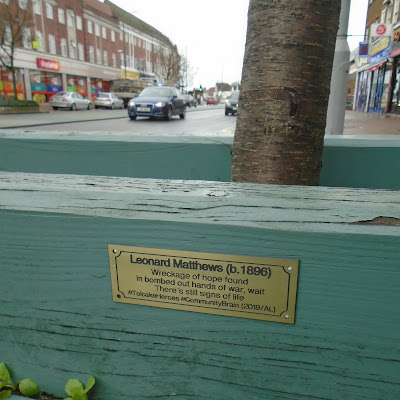 Today we finished off the Tolcake Heroes exhibition with a final brass plaque dedicated to Leonard Matthews. It has been a wonderful exhibition from Sam Tout and Alban Low who hope to be working on a new exhibition in 2020.

The George Medal has been awarded to Mr. Leonard Matthews, a Surbiton A.R.P. worker, of 7, Hazelbank, Tolworth, for his gallantry in tunnelling under the wreckage of a bombed house and causing a trapped man to be rescued, following a raid in September. Mr. Matthews was the leader of a stretcher party which rescued three people from under the stairs of a bombed house, and then turned their attention to another wrecked house. “We were told that a man, Mr. Butler, and his wife and child were under the debris,” said Mr. Matthews, “There was no sign of life but I started a tunnel with my hands, and eventually found Mr. Butler under the wreckage. My colleagues and I pulled him out. He was almost unhurt. His wife and child, luckily, were not at home when the bomb fell.” Mr. Matthews served in the R.A.M.C. in the last war, and for a few years after the Armistice. He twice played in Army Cup Association football finals, and received first a winners’ medal and then a runners up medal from the late King George V, who. just after the last war, decorated him with the Meritorious Service Medal, which Mr. Matthews was awarded for helping to prevent an ammunition train from being blown up in Russia. “Although I have shaken harids with his late father, I have never had the pleasure of meeting our present King,” Mr. Matthews said.
Surrey Advertiser - Saturday 21 December 1940

Posted by Collect Connect at 08:40